Today y’all are going to see us take on another #DriveThru Challenge! We’ve seen SO many IRfacers do this and have a ton of fun with it, so we decided to let the person in front of us decide what we eat for an ENTIRE DAY! Risky, right? Would you ever try this? 🍔
✅ For daily fun, be sure to follow us on Instagram HERE! brooklynandbailey
This #challenge works exactly how it sounds: You go through a drive thru, and instead of ordering what you want to eat, you say “I’d like to order what the person IN FRONT of me ordered”. There’s an element of surprise to it, and most order takers pause when you ask that, often repeating what you just said to make sure. Think of this like a Grab Bag, only instead of toys… it’s your LUNCH and you never know what you’re going to get! 😂
It’s fun to do this as #twins, because our tastes in food are so similar, that the commentary is hilarious. We went to McDonalds for breakfast, and were pleasantly surprised by what we got! We basically received what we would have ordered even by choice on our own, so we really lucked out! For lunch we went to Taco Bell and Sonic. Taco Bell was… interesting… However, we did realize that we like the Doritos Locos Tacos! 🌮 Sonic was sort of a bust, since the person in front of us only ordered drinks! 🙈
Since we didn’t really have much luck with lunch, we were so hungry by dinner time! We went to Panda Express, and had a WIN! The person in front of us ordered orange chicken, teriyaki chicken, and FRIED RICE! We were so happy, because that’s what we always order there! We really lucked out with dinner! 🍲
After dinner, we just had to go get dessert (obviously)! We stopped by Andy's Frozen Custard and ended up getting 3 different ice creams! None of which ended up being something we would typically order on our own, but not bad, nonetheless! 🍦😋
We were laughing the whole time, wondering if anyone has tried to complete this challenge behind our family car in a drive thru line! They would be in for a nice surprise, for sure, receiving enough food for 8 people! ! 😂
What is your favorite fast food restaurant?? Comment below!
💋's - Brooklyn

_
FTC Disclaimer: This is not a sponsored video. 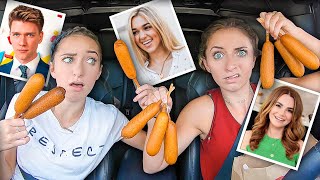 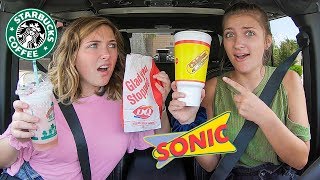 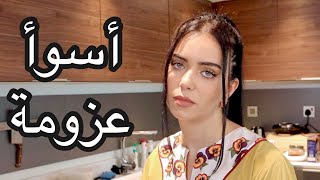 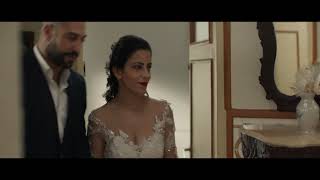 Letting the Person in Front of Me Decide What I Eat For a Day! | Aspyn Ovard

LETTING THE PERSON IN FRONT OF US DECIDE WHAT WE EAT FOR 24 HOURS!!!

Letting The Person in FRONT of Me DECIDE What I Eat for 24 HOURS! | Steph Pappas

Letting The Person In Front Of Us Decide What We Eat Today!

IDENTICAL TWINS Get Wisdom Teeth REMOVED | How Will the Twins React?

Our iNSTAGRAM FOLLOWERS Control OUR LiVES for a Day!